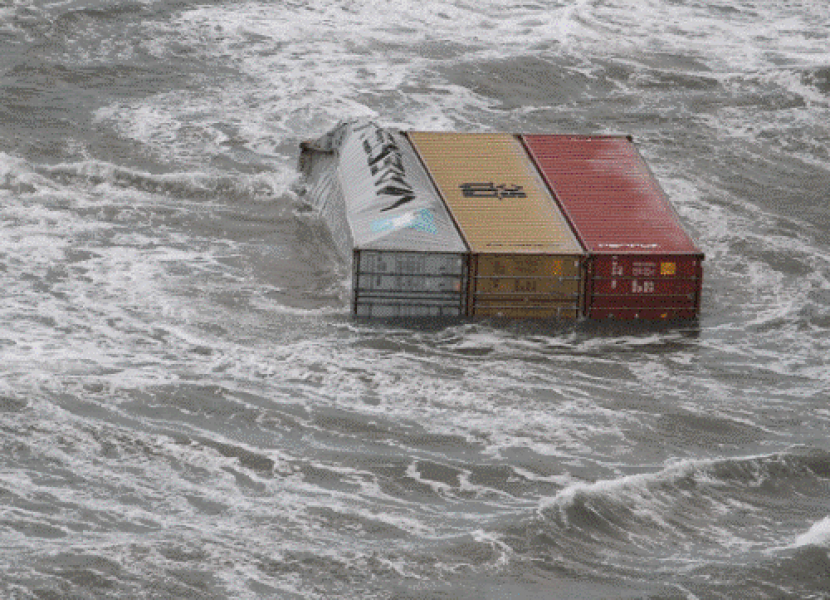 The shipping industry has long known about the dangers of parametric rolling with researchers working to expand the understanding of the phenomenon that has increasingly become linked with damage to containers and car carriers. Now a Danish company that manufactures a broad range of sensors reports it has developed and tested a system on containerships that can alert crews to the danger or even automatically adjust a ship’s course before it begins the rolling phenomenon.

The hull forms of modern containerships and car carriers are believed to make them especially susceptible to parametric rolling. In the worst cases, during a series of uncontrollable movements, ships have reported that they heel up to 46 degrees in a very short time. Investigators have long believed that these incidents, which often come up quickly and without warning have contributed to container stack collapse and the loss of containers overboard such as the recent incidents with the ONE Apus, APL England, and several Maersk ships.

A current three-year study being undertaken by the container shipping sector has already identified that parametric rolling in following seas is especially hazardous for container vessels. The project is conducting testing and measurements to further identify the causes and how they can be addressed but so far has largely only been able to provide mariners with a few warnings and general instructions.

Danish company, Kjærulf Pedersen, which manufactures and develops sensors for measuring temperature, humidity, CO2, and O2, now reports it has developed a sensor system that can recognize the tendencies that lead to parametric rolling and send a message to the ship's control system so the
system and crew have time to change course.

"Parametric roll can occur in just eight wave cycles, each lasting four to five seconds, and from roll to roll, the heeling may be doubled. It is impossible to detect, because it goes very quickly, and the situation is incredibly dangerous for everyone," says Ole Egelykke-Milandt, sales engineer and project manager at Kjærulf Pedersen.

On the other hand, Egelykke-Milandt notes that it only requires that the course be changed slightly for the ship's movements to slow down again.

The company’s system is based on three sensors, placed at the bow, amidship, and stern. All the ship's movements are monitored in real-time up to 100 times a second. The system compares the observations with data on the ship's speed, acceleration, and direction. The sensors detect if the movements are approaching a state that can become uncontrollable, and notifies the ship's control system so that the course can be changed and the uncontrollable tilts are avoided.

Since January, the system has been installed on four large container ships that sail between China and the US, and the company reports its tests with Maersk have shown that the system is successful in recognizing the warning signs for parametric rolling. Kjærulf Pedersen reports that the system is now being implemented on the shipping company's container fleet.

"In the long term, the plan is for data from the ships to flow into a central location so that all the shipping company's ships can have use of the collected data. In this way, we get an algorithm that gets better and better at predicting dangerous situations, thus increasing safety significantly," says Egelykke-Milandt.

The large amount of data from the sensors will also be used for other improvements such as weight distribution and the ship's trim in the water.

TIMELOG shipping as NVOCC operator and carrier company with the capabilities to efficiently manage the movement of varied types of cargo between ports in Asia and global inland.